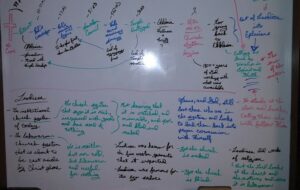 Laodicea was an actual city with an Ekklesia to whom Paul had ministered and wrote letters.

For I would that ye knew what great conflict I have for you, and for them at Laodicea, and for as many as have not seen my face in the flesh;

For I bear him record, that he hath a great zeal for you, and them that are in Laodicea, and them in Hierapolis.

Salute the brethren which are in Laodicea, and Nymphas, and the [church Ekklesia] which is in his house.

And when this epistle is read among you, cause that it be read also in the church of the Laodiceans; and that ye likewise read the epistle from Laodicea.

Of the seven assemblies mention in the letters of Revelation 1:11, Laodicea is at the southern most and eastern most location.

And unto the angel of the church of the Laodiceans write; These things saith the Amen, the faithful and true witness, the beginning of the creation of God;

Because thou sayest, I am rich, and increased with goods, and have need of nothing; and knowest not that thou art wretched, and miserable, and poor, and blind, and naked:

eyes with eyesalve, that thou mayest see. As many as I love, I rebuke and chasten: be zealous therefore, and repent. Behold, I stand at the door, and knock: if any man hear my voice, and open the

door, I will come in to him, and will sup with him, and he with me. To him that overcometh will I grant to sit with me in my throne, even as I also overcame, and am set down with my Father in his

throne. He that hath an ear, let him hear what the Spirit saith unto the churches.