The Parable of the Ten Minas

As they heard these things, He proceeded to tell a parable, because He was near to Jerusalem, and because they supposed that the Kingdom of God was to appear immediately.

Jesus uses this parable to set the record straight concerning the timing of the Kingdom and His expectations of His disciples.

I believe this parable is a key to living a Christian life that is pleasing to God. 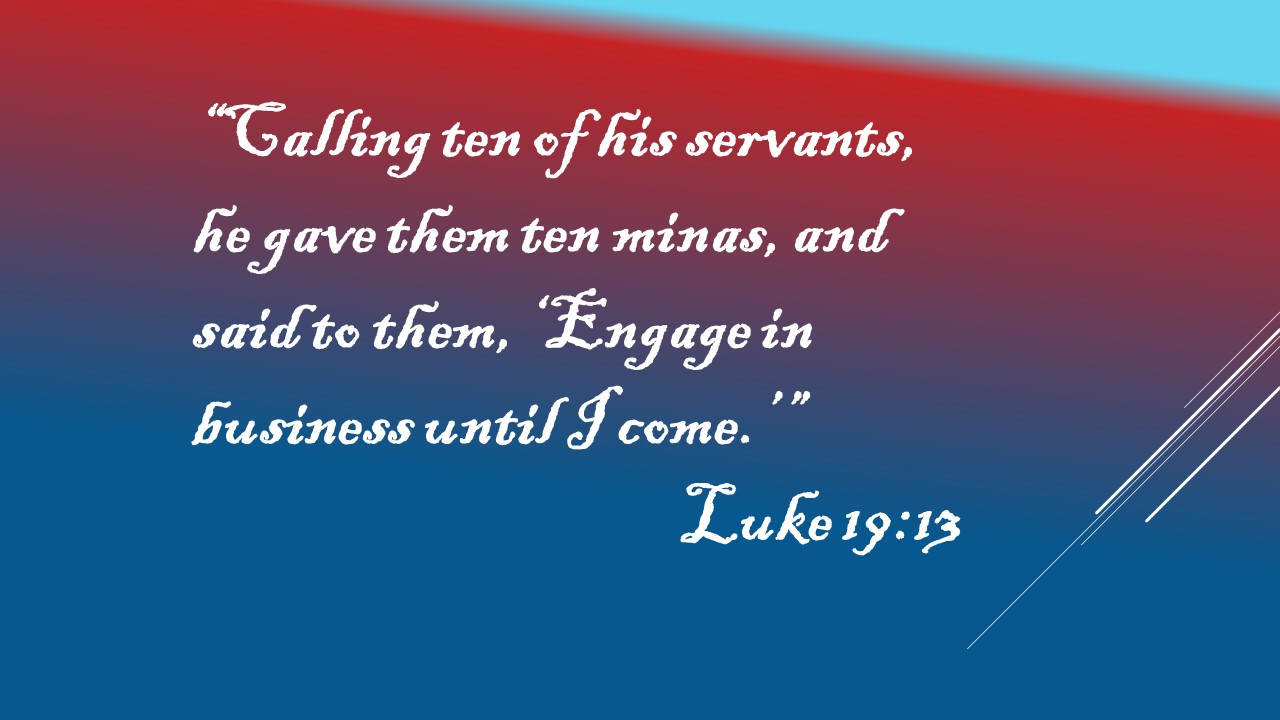 Parable of the Ten Minas

This parable is in the Gospel According to Luke, 19:11-27. It is an essential teaching for believers to learn to value obedience and that there are degrees of reward for the servants of God. There are three distinct classes of believer in this parable which I see as believer, disciple, and overcomer. As you study this parable, determine whether or not you see it the same way. If not, how do you see it? What is the reasoning and scriptural support for it?

Beginning in verse 11 we learn that the disciples of the day were expecting that the “Kingdom of God was to appear immediately.” This is not unlike today as some people expect a rapture to take place at any moment as they wait for deliverance out of this world and its problems. I was once numbered among them as I kept busy in the church without bearing much fruit. To some effect, this expecting sudden deliverance causes a paralysis that keeps believers from enthusiastically and effectively working for the Kingdom of God. There is an expectation for God to do something rather than working to do what God has instructed us to do.

Jesus told this parable to those who were with Him at the home of Zacchaeus, a chief tax collector. I believe this parable is instruction for His disciples, believers with ears to hear. It includes warnings for those who do not heed the command to engage in His business until He returns.

He said therefore, “a nobleman went into a far country to receive for himself a kingdom and then return.

I believe the nobleman would equate to Jesus.

Calling ten of his servants, he gave them ten minas, and said to them, ‘Engage in business until I come.’

But his citizens hated him and sent a delegation after him, saying, ‘We do not want this man to reign over us.’

Whoever is not with me is against me, and whoever does not gather with me scatters.

“If the world hates you, know that it has hated me before it hated you.”

It is no secret that there are those in this world that hate Christ and all that goes with Christianity. Back to verse 14 of Luke 19.

When he returned, having received the kingdom, he ordered these servants to whom he had given money to be called to him, that he might know what they had gained by doing business.

The first came before him, saying, ‘Lord, your mina has made ten minas more.’

And he said to him, ‘Well done, good servant! Because you have been faithful in a very little, you shall have authority over ten cities.’

The second came, saying, ‘Lord, your mina has made five minas.’

And He said to him, ‘And you are to be over five cities.’

Then another came, saying, ‘Lord, here is your mina, which I kept laid away in a handkerchief;’

‘Why then did you not put my money in the bank, and at my coming I might have collected it with interest?’

And he said to those who stood by, ‘Take the mina from him, and give it to the one who has ten minas.’

And they said to him, ‘Lord, he has ten minas.’

‘I tell you that to everyone who has, more will be given, but from the one who has not, even what he has will be taken away.’

‘But as for these enemies of mine, who did not want me to reign over them, bring them here and slaughter them before me.’”

So faith comes from hearing, and hearing through the word of Christ.

So also faith by itself, if it does not have works, is dead.

And without faith it is impossible to please Him, for whoever would draw near to God must believe that He exists and that He rewards those who seek him.

When He comes on that day to be glorified in his saints, and to be marveled at among all who have believed, because our testimony to you was believed. To this end we always pray for you, that our God may make you worthy of His calling and may fulfill every resolve for God and every work of faith by His power, so that the name of the Lord Jesus may be glorified in you, and you in Him, according to the grace of our God and the Lord Jesus Christ.

Now if anyone builds on the foundation with gold, silver, precious stones, wood, hay, straw – each one’s work will become manifest, for the day will disclose it, because it will be revealed by fire, and the fire will test what sort of work each one has done. If the work that anyone has built on the foundation survives, he will receive a reward. If anyone’s work is burned up, he will suffer loss, though he himself will be saved, but only as through fire.

I appeal to you therefore, brothers, by the mercies of God, to present your bodies as a living sacrifice holy and acceptable to God, which is your spiritual worship.

Back to Topics Page