Being Disciples is hosted on Podbean.com at https://beingdisciples.podbean.com/ with new episodes weekly. These episodes will be the jumping off point for discussions in some of the small groups formed here; perhaps others will go in a different direction concerning content for study. The study notes corresponding to the episodes can be found in the above link, Virtual Study Topics and Links.

We have established a video channel that will have a slides presentation with the voiceover of the podcast. This is for those who enjoy viewing something in addition to hearing it.         Rumble.com/BeingDisciples        Find the Patron Informational video here to learn more about this venture.

Each podcast episode will have the audio version, a video version, and study notes, so each person can select what works best for them. These can be used to study along with us, for an individual study or deeper look, or to lead a small group of your own. Everything here is for the benefit of the Body of Christ and is free for your use. 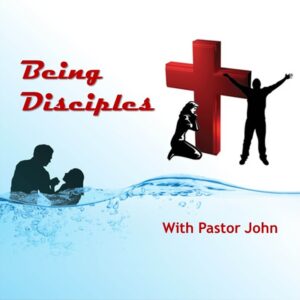 If you wish to send a gift:

Episode 25 – A Relationship with God

What does a relationship require? Is it different with God?

I will be joined by Bill Livingston for the conversation segment.

An exploration of these facets of the Christian life.

Our destiny is to be grasped and lived out. First we must understand what it is.

Knowing our destiny is one thing. It is another to know how to live it out.

I will be joined by Joshua Griffis for the conversation segment.

Every believer has a role in the kingdom of God. Discover your role and live it.

God is referred to in many ways in Scripture. Each name has a meaning and is what God wants to be to His children.

What is a stronghold? What can I do about it? What has the power to destroy strongholds?

Scriptures for healing that we need to soak into our spirit.

What is communion? Why do we do it? We will also look at how to study a topic.

EPISODE 34 – A Spirit Of Thanksgiving

Living in a spirit of thanksgiving will transform one’s life. Let’s discover how to do that.

Both require sincerity and truth. How do we use these disciplines and why?

I will be joined by Kimberly Brown for the conversation segment.

EPISODE 36 – TRinity Part One – The Name of Jesus

Jesus, the Son of God, has the name above all names. What does that mean for us?